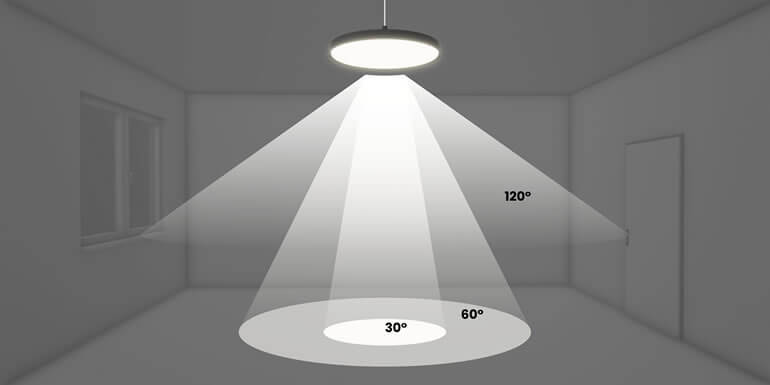 In addition to the watt and lumen specification, there is an additional value that is decisive for the choice of an LED: the beam angle. It has a significant effect on how brightly the lamp and spotlight illuminate a surface. We have summarized for you what you need to know about the beam angle of your LED lighting.

The angle allows the right light in the room

So that the different light installations do not get in each other’s way, it is important to consider the beam angle of the built-in LED lamps. This prevents the light cones from overlapping and there are no overexposed areas in the room. However, before you can take this into account, you have to know what exactly is meant by the term beam angle of an LED.

Basically, it is important to pay attention to the beam angle for every type of LED, regardless of whether a ceiling light or an LED spot is used for lighting. As far as the angle is concerned, however, it makes sense to differentiate between a directional light source and an omnidirectional light source. The classic light bulb, for example, is a round radiator that distributes its light in all directions and only gets a certain direction through a lampshade. A directional illuminant, on the other hand, shines in a precise direction. The LED in its various forms such as spot, radiator, or bar belongs to the second category.

The beam angle, which is specified in degrees, determines the angle at which a luminous flux emerges from a light source.

The beam angle of an LED is decisive for how the light is thrown into a room. Together with the distance between the lamp and the ground, a circle of light is created. The greater the distance between the ceiling and the lamp, the larger the area covered by the circle of light. However, not every area covered by the circle of light achieves the same brightness. The spread of the light is responsible for this. In order to describe this effect, the term field angle was introduced in addition to the radiation angle. In some descriptions of the beam angle, the term half-power angle is used. In fact, these are just two terms for the same phenomenon.

Especially with accent and decorative lighting, which are implemented with LEDs, attention must be paid to the right beam angle. So you are on the safe side to illuminate the desired object appropriately. The following table is used to illustrate the relationship between the diameter of the circle of light and the half-value angle. As the average ceiling height of new buildings is between 2.3 and 2.5 meters, the table assumes a ceiling height of 2.4 meters.

It becomes apparent that the half-value angle of an LED has a significant influence on the actually illuminated area of ​​a room. The larger the angle selected, the larger the area covered by the light from the illuminant.

Calculate the beam angle of an LED yourself

If you already know two important key data – the diameter of the required light cone and the distance between the lamp and the illuminated surface – you can calculate the half-power angle yourself without much effort.

a = 2 x {arctan [d / (lx 2)]} is the formula for calculating the beam angle. The arctan is the inverse of the tangent used in calculating angles. On most calculators, it is marked with the arctan key.

The value a represents the beam angle of your LED to be calculated. The value designates the diameter of the required light cone or the area to be illuminated. The distance between the lamp and the surface is marked with the value l. If you insert the last two values ​​into the formula, the beam angle required for your desired LED is calculated. Unnecessary bad purchases of the wrong LEDs can be easily avoided.

The lumen value of LEDs is an indicator of how bright the light from the light source is. The larger the value, the brighter the respective lamp can shine. With two identical lamps with different beam angles, the perceived brightness is very different.

When choosing an LED light source, it is not only important to pay attention to the values ​​of lumen and beam angle, but also to the interaction between the two factors.

A lamp with a half-power angle of 15° and one with a half-power angle of 60°, which have the same lumen value, have the same light output on paper. However, the 60° light source covers a much larger area with its circle of light than the 15° lamp can. The larger area in this example will be less brightly lit than the smaller 15° fixture if both fixtures are mounted at the same height.

Can the beam angle of an LED be edited afterward?

Sometimes you want a change in your own four walls and the interior needs to be adjusted. This also includes the lighting. In this case, the structure of an LED cannot be changed later. But what about the beam angle? To reduce the angle, one immediately thinks of an improvised lampshade. Quickly crafted, it invites you to live out your creativity. Attaching a diffuser comes to mind to increase the angle.

The beam angle of LED lamps cannot be reduced or increased by hand. Modifications carried out independently can lead to heat build-up, burns through, or even fires.

If you are not satisfied with the half-power angle of your LEDs, we recommend purchasing a new one. Thanks to the lower power consumption and the comparatively low acquisition costs, the replacement is worthwhile. It’s also the safest course of action, both for you and your belongings. You can save yourself the costly conversion work by a specialist. The old bulbs can easily find a new place of use elsewhere in the apartment.

The purpose of use also decides on the beam angles

The lighting of living spaces serves different purposes. That’s why we offer a wide variety of light sources, from recessed lights to spotlights and strips to modules. The LEDs in different sizes can be used for any purpose:

With basic lighting, you want to bathe a room in bright light over as wide an area as possible. In living rooms such as bedrooms or living rooms, a large beam angle of 120° is ideal for LED lighting, so the light cone is very large.

Several 90° spots are ideal in narrower areas such as corridors. The beam angle of LED lighting for accent lighting or for decorative purposes is more dependent on two factors: the distance to the lamp and the size of the object to be illuminated.

Choosing the right half-power angle for your LEDs is immensely important. With the right values, wonderful worlds of light can be created in the home. Incorrectly selected angles lead to the opposite, glare effects or corners that are too dark can occur. Therefore, keep in mind the factors of intended use, the distance between the lamp and the illuminated area as well as the size of this area when purchasing new LED lamps that have an optimally selected beam angle.

How to connect LED strips

How to cut LED light strips